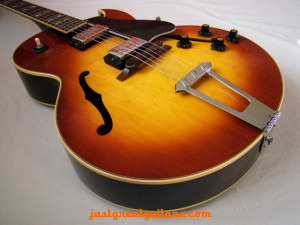 Occasionaly we come across a Gibson made after 1970 that is clearly GREAT. This is one such guitar.

It’s in outstanding condition, completely original and the slightly faded cherry sunburst is just so alluring you cant leave it alone.

It’s a little heavier than a 68 or 69, but with a bigger-feeling neck. There’s no volute which is a good thing, and those distinctive 72 embossed pickups sound as good as they look.

1972 Gibson ES-175D – Arguably the most famous Gibson archtop model, this 1972 instrument is a single cutaway beauty with a  three-piece maple neck and two Gibson humbuckers. The rosewood fingerboard is a true joy to play and you can immediately hear (and feel) why this guitar has earned its enviable position of player popularity.

From intricate chordal work through to articulate single-line playing, this ES-175D plays like a dream and the two Gibson humbuckers deliver that much copied, but never equaled vintage tone. the workmanship on this guitar is first class as you’d expect from Gibson, with a great attention to both cosmetic detail and playability.

An original early 70’s guitar which comes with the case it was sold in, this represents a great investment for both the player and the collector and is a surprisingly versatile sounding instrument which covers a lot of musical ground.