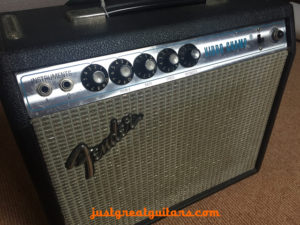 This compact but highly impressive silverface Fender combo was developed from the earlier blackface Vibro Champs and was partly named after the highly popular tremolo circuit. Manufactured from 1967 onwards until 1981, the silverface Vibro Champs pretty much kept the same circuitry (unlike other Fender amps of the period) that had been present in the blackface era (1964-67)

The main sonic feature on this Fender Vibro Champ combo is it’s outstanding clean tone which is everything you’d epect from a Fender tube combo. Rich and resonant with plenty of bite, it also easily enters into a warm ‘crunchy’ overdrive with little persuasion. Many a guitarist starting out in the 60’s would have learnt their craft through one of these amps or it’s non-tremolo little brother.

Suitably versatile for Jazz, Rock, Country and Blues players, this is a vintage guitar tone that will keep you plugged in for days at a time and makes an especially good amp for the studio as well as small club work. The amp is in very good condition with just some minor wear and is wired for US voltage but easily set up for European customers via an inexpensive step down transformer.