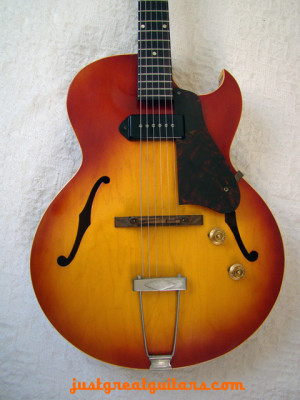 Check out our new video demonstration of this guitar below.

JGG have long been fans of the ES-125 and it remains one of our most popular models of Gibson guitar. It has great versatility and works well in almost any style of traditional guitar playing, from Blues and Rock through to Jazz and Swing styles. It also sounds incredible acoustically as well as plugged-in.

This ES-125TC guitar features the highly sought after ’61 neck profile, offering a slightly wider and flatter radius that found favour with many guitar players including Led Zeppelin’s Jimmy Page. You really have to try this neck to fully appreciate why it plays the way it does and we certainly share JP’s affection for it. Chords and single-lines alike are very comfortable to play and thanks to the adjustable compensated bridge you can set the guitar action up exactly as you’d like too.

The single black P-90 pickup sounds as clear as a bell and lends itself very well to articulate chord work and rhythm playing. Soloists will enjoy this pickup just as much and single line playing has a rich and detailed quality that you just can’t get with anything other than a P-90. Clean or overdriven it just sings.

The Gibson ES-125TC guitar is in very good condition overall with just the regular bumps and road wear you’d expect from a 50+ year old instrument. The neck is straight and fully adjustable via the truss rod and although there is some fret wear in the lower register of the fingerboard, it plays very well indeed and there’s no immediate call for a re-fret. The guitar comes with what we believe is the original Gibson case. A wonderful sounding and playing Gibson classic from 1961 and if it’s good enough for Jimmy…