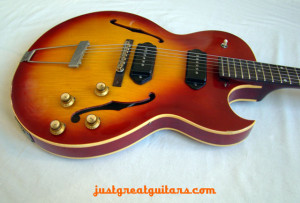 Priced to match the player’s budget.

The price of TDCs – that’s the cutaway thinline with double pickups, has kept going up, pushing most of these fab guitars out of the reach of the most deserving players. So if you are looking for true vintage from Gibson’s golden era, then this could be your chance to get your hands on a real treat.

62 Gibson necks are lovely to hold. Thicker (deeper) than the flattened neck of 60 and 61, but just as wide. This is no exception.

It’s been refretted at some stage in its life and the hard case is old but not original. The hinges have failed on the case too. The bridge base looks later and has been pinned in place (not a bad thing). The only part left of the pickguard is the screw that held it in place at the front, and the output socket has been mounted on a plate. These are all signs that the guitar was a proper working instrument. This is confirmed cosmetically by the ‘belt-burn’ on the back, the lump missing from the top of the headstock and the way the finish has aged that suggests years of working in clubs. This is, quite simply, the real deal – a working musician’s guitar from 1962.