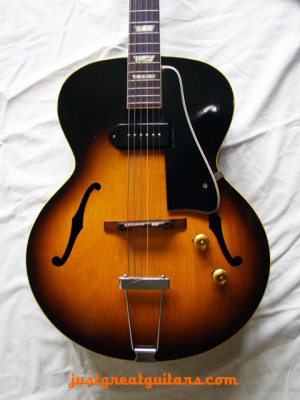 Rare chance to buy a rare mid fifties guitar. This deep sunburst jazz box is certainly a class above the average 125. It’s in good condition, with the ‘dings and dongs’ of player-wear that is expected of a 60 year-old.

The trapeze tailpiece has been replaced and the original knobs have no-doubt been ‘re-purposed’ for a Les Paul. The tuners are original, only the buttons have been renewed – a good thing because the old ones disintegrate eventually. The hard case is period correct but not original to the guitar.

Yes, it’s a lot like an ES-125 but it cost $10 more back in the day, and was considered the ‘upmarket’ version. It had a bound neck, trapeze fret inlays and a 5-ply pickguard – fancy indeed!

The limited production of Gibson’s ES135 model makes it more interesting from a collector’s point of view. I mean, everyone’s got a 125 jazz box right, but how many people have a 135 or 130?

To give you an idea of the scarcity of this model, just take a look at the production numbers for 1956:

’56 marked the height of the popularity of the 125 model – remember the cutaways and thinlines weren’t introduced until the 1960s – and it must have made sense to Gibson to offer the ‘student model’ 125 and the upmarket alternative the 130 / 135. However, it didn’t make sense to the buying public, who went-on buying 125s and the 130/135 was discontinued in 1958 after just four years of production.

Only 556 of these guitars were ever made and shipped by Gibson.