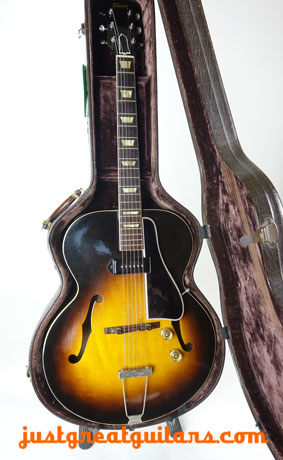 The “Electric Spanish” guitar that started it all, the Gibson ES-150 was the model made famous by jazz guitarists of the 1940s and 50s such as Charlie Christian and Jimmy Raney.

It would be hard not to like this 1951 Gibson ES-150 jazz box not least because of the gorgeous Galperin hard case it’s presented in. That case is better quality than the Gibson Lifton that would have been offered in 1951, so we can only guess that the original dealer or customer specified it making it even better than ‘original hard case’!

The guitar within seems to have spent much time without, as the dings to the headstock and back of the neck show. The body is fine though and everything appears to be original, including the tuners which are not the expected three-on-a-plate Kluson deluxes. Instead we see individual Kluson-shaped tuners with metal buttons and with no tell-tale marks left by an earlier set of tuners it is my theory that these are correct. Why? Perhaps Gibson ran-out of the Deluxes that day or they were simply trying-out alternatives – ‘transitional’ features often appear on these Gibson ES-150 guitars of the early fifties.

Of course, it plays great with that full fat fifties P-90 sound that makes the ES-125 and ES-150 so popular with jazz guitarists. The frets are good with plenty of life left in them and the neck is straight and plays right up to the 12th. It has a very nicely-figured back too.