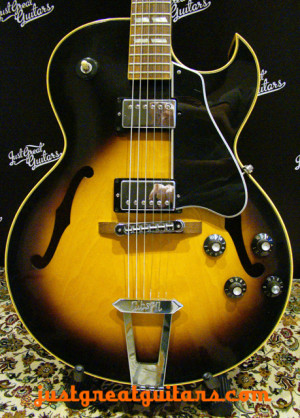 OK, so Gibson no longer make the Gibson ES-175 so the only way to own the iconic jazz box that is the Gibson 175 archtop is to find an old one that’s in top-rate condition. That’s exactly what you have here, and the irony is it has word ‘second’ embossed beneath the serial number. Now, we’ve all heard the story about this being a way for Gibson employees to get hold of a guitar at a discount and that may have been true in the seventies (it certainly happened in British factories, I know, I was there) but what is certain is that any imperfection would have been minor and cosmetic. We’ve had a number of these, sometimes stamped with the number ‘2’ and have never been able to find the ‘imperfection’ and I doubt you will either.

Back to the distinguished sunburst Gibson 175 of this discussion and despite being almost 40 years’ old it feels like a modern guitar, just without that stiffness that brand new instruments have. It’s literally broken-in and therefore much more pleasant to play. It compares favourably with the 72 we have (I have a soft spot for the embossed pick-up covers and thinner finish of that year) being just a little heavier to handle. The actual features that changed could only have increased the weight marginally: the size of the supporting panel below the pickups which got broader after the sixties, the depth of the lacquer which increased and the sculpting of a volute in the back of the neck where it meets the heads to increase strength and resilience.

This is a wonderful sounding sunburst Gibson ES-175 from 1979 and it exemplifies everything that is great about this iconic Gibson archtop guitar. As you will see from the demonstration video below, the guitar is just a dream to play and has a beautiful rich and warm tone from the twin Gibson humbuckers, which will take you from jazz to rock/blues and even country tones at the flick of a switch.