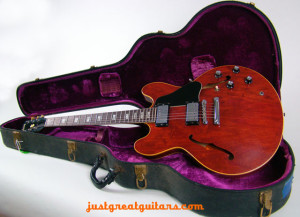 Originally with a trapeze tailpiece, this guitar has been lovingly converted to a ‘stop-tail’. The top of the neck was refinished at the same time to get rid of something gooey that had found its way into the finish.

Call: +44 787 158 9703
The Gibson ES-335 remains to this day, one of Gibson’s most popular electric guitars and was initially introduced in 1958 to meet a growing demand for a thinner bodied design somewhere between the company’s full bodied archtops and their solid body guitars like the Les Paul.The ES-335 proved an almost instant success with guitarists and is still being manufactured by Gibson today. This guitar can cover rock, blues, jazz, country and funk guitar styles with ease and if you have followed the career of ‘Mr. 335’ Larry Carlton, then you may know that his most prized instrument is also a 1969 ES-335, which he purchased new that same year. This is the principal guitar that you hear on many of his famous sessions and also on his early solo albums.Equipped with two original Gibson humbucking pickups, you can hear immediately upon plugging this guitar in, what has attracted players as diverse as Eric Clapton, Alvin Lee, B.B.King, Lee Ritenour and Eric Johnson to the ES-335. This list of some of the world’s most famous guitarists certainly gives you an indication of the guitars popularity as well as its sheer versatility.

Featuring a mahogany neck without the volute that was to appear in later years, this vintage ES-335 is an absolute dream to play. With its bound rosewood fingerboard you can feel instantly what attracted so many players to the ES-335. The double cutaway affords very easy access to the upper reaches of the fingerboard and the medium/jumbo frets make everything from intricate chordal work to single line soloing very easy to perform.

Clean tones are rich and articulate with this guitar and you can hear why so many jazz influenced LA studio players favoured this model in the 1970’s/early 1980’s. String bending is especially comfortable on this particular guitar and if you are an established blues/rock player or simply want to emulate the bending prowess of Mr. Carlton, then you really have found your perfect guitar.If you turn up the gain on your amp and get into serious overdrive territory, then this guitar really does ‘sing’ for you. The front pickup has a glorious sustain and articulate character, which is very typical of Cream-era Clapton or Eric Johnson. Switching to the bridge pickup, you have plenty of blues bite and power and those Alvin Lee licks will sound especially authentic. This guitar really has ‘the tone’.This ES-335 is in good condition with some honest playing wear and is offered in its original hard case. There is evidence of a neck repair at some point in its past, however it has been professionally repaired and is totally solid. 60s ES-335’s are becoming more and more desirable, expensive and sought-after and it is great to be able to offer this guitar at such an affordable price. Originally fitted with a trapeze, the stop tail ABR-1 Bridge makes it identical to Larry Carlton’s so you really are getting the best of both worlds – tone and affordability.