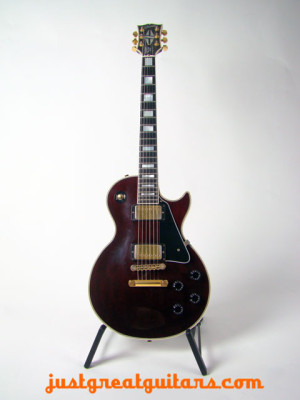 The Gibson Les Paul remains for many players the ultimate rock guitar and although it has found favour with guitarists in other styles of music, it’s the classic rock sound of a Les Paul blazing through a loud overdriven tube amplifier that attracts all the attention.

From Jimmy Page with Led Zeppelin right through to modern day rockers like Slash, the Les Paul has always attracted the finest players and made some of the greatest rock music ever.

The Gibson Les Paul Custom shares the same one-piece mahogany neck, carved maple top and mahogany body as the Les Paul Standard, and has an ebony fingerboard, which provides a much brighter attack than the Standards rosewood neck. Great for classic rock and biting blues tones.

This 1997 Les Paul Custom plays like a dream. Aside from the classic design, the playability and tone of the guitar are really second to none.

Access to the entire fingerboard is very easy and due to the outstanding craftsmanship of the neck, it feels as though your fingers are just gliding over the frets. Chords and single line playing are quite effortless. The real thrill though is when you plug this Les Paul into a good tube amp.

The moment you turn on your amplifier you’ll hear why there is so much fuss about the Les Paul sound. It’s rich, dynamic, resonant and highly expressive. The front (rhythm) pickup is built for warm, bluesy rock tones and cleaning up your channel gain will give you very impressive jazz tones too.

The bridge (treble) pickup is built for classic rock or gut wrenching blues solos with a great mid-high frequency character that will certainly let you cut through on stage. This pickup really does rock! No mention of a Les Paul can go by either without discussion of its natural resonance and this guitar really has sustain for days (think Gary Moore and you will get the idea)

The guitar is in very good condition throughout with only some minor gig scars and player wear and is offered with a lined Gibson case. If you are a serious rock/blues guitarist and want the very best, then you need look no further than this guitar. It has the sound, the playability and the looks all in one package. It doesn’t get much better than a Les Paul Custom.