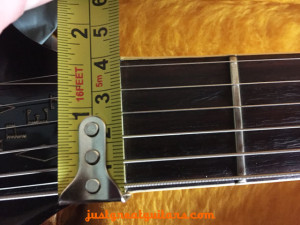 Here’s Part II of the interview with Russ (owner/buyer/founder of JGG) conducted by Huw Price.

Old guitars can vary depending on their vintage and Russ has a clear preference.

‘I have to say that 1966 is my favourite vintage year for Gibsons. I like the gold knobs and I like the neck shape because it’s still got some roundness to it even if they can sometimes be a bit small. Also by 1966 they had sorted out a lot of the problems. ‘I have a 1966 ES335 that I paid a lot of money for and it has a factory original ES345 neck. You can tell from the inlays and I’ve seen this quite a few times. On the day it was made the factory had probably run out of ES335 necks so they fitted this one instead.’ 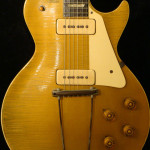 ‘When I sent this to the workshop for a clean and setup they just loved it. They drooled over it, took measurements and couldn’t get over how light it was. They even charged me £10 less than usual because of the sheer pleasure they had doing it. I picked it up from a dealer in America at the beginning of the crash. He was asking something pretty ridiculous but I felt like a retail customer, I just couldn’t put it down. So I engineered a deal with the guy by telling him how much the market was going to drop and making an issue out of the repaired headstock. When he agreed to my offer I was a bit shocked. It’s such an expressive guitar and you just connect with it in a very special way. But of all the vintage Les Pauls it’s the cheapest. As soon as you move up to the stop tailpiece you go to big money.’ 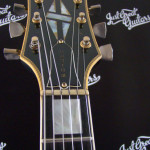 So if Russ likes it that much, won’t it be hard to part with it?

‘Well here’s the problem. My antiques dealer dad always used to say “you’re either a dealer or a collector” and that if you put something in the shop, never put a ‘not for sale’ tag on it. I’ve always lived by that rule and so far it’s not in the shop, but that could change’

‘..It was monstrous, far too big for me, and it didn’t even have a case but it was my main guitar for a long time. I regret selling it, and it was the only guitar my wife ever cared about. She never quite forgave me for that. So I’ve had a soft spot for Gretsches ever since, particularly the way they’re so over engineered. I’ve got two Gretsch Jet Firebirds, a ’61 and a ’63, and with the chambered bodies they have a great sound. I keep thinking about using the ’61 as my gigging guitar because those Filtertron pickups are really good. Gretsches are expensive and they’re hard to shift but I just like them. I’ve got a 1950 Country Gent and a couple of double cutaway Gretsch Chet Atkins models too and they’re nice guitars, a bit like an ES335 but heavier. I have a ’68 Gretsch 6071 bass too. It’s got Supertron pickups, painted F holes, a mute and a cello stand so you can play it upright. This is a monster and the neck feels like a log. It’s completely hollow and it has a lovely sound with tape wound strings. I got it from a bass player, who also sold me his Gibson EB0.’ 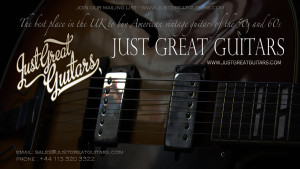 Despite his wide taste in music, Russ’ true love is jazz

‘My first jazz guitar was a Gibson ES125 and I couldn’t believe how cheap they used to be. Again it’s my attraction to the P90 sound plus I love George Thorogood. I never really played the deep bodied ones but the thinline ES125s have such an awesome sound. The jazz guitarist Emily Remler played an ES125 too as well as an ES330. From my website point of view ES125s in all variations are our bread and butter. The rarest is the ES125CD model, with a deep cutaway body and two pickups. I’ve only had one of those and everybody who sees it thinks it’s an ES175. My ’63 ES125TCD has a cherry sunburst finish and when they’re in unfaded condition it’s often a shock to discover how bright and vivid they actually were. This one came from a well known dealer who has recently been releasing a lot of the inventory he’s been sitting on for twenty years. The prices of these have gone up quite a lot and I’ve also got other examples from ’61, 62 and 66.’

Ever a champion of under appreciated models and brands, it’s no surprise that Russ has a passion for Epiphone. 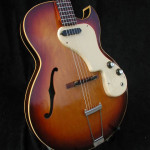 ‘I progressed from the ES125TC to the Epiphone Sorrento. I’ve got a ’64 and a ’66 with mini humbuckers and higher quality hardware, and in the 1950s Epiphone was a better brand than Gibson. Gibson probably bought them to shut them up because they were embarrassingly good. I have a couple of ’66 Granadas too. The Sorrento was the only one that Gibson didn’t insist on being a lesser model. Unfortunately the Epiphone name has definitely been devalued and that has had a knock on effect with the vintage guitar market. So they’re usually less money than the Gibson equivalent but usually just as good if not better. I’m sure that will correct itself one day when players figure it out. ‘It’s exactly the same with Guilds and I think they’re good investment guitars. I have a 1958 T100 that’s the same sort of size as an ES125TC, with a white P980 style pickup, old Guild knobs and it’s clean as a whistle. It has a three piece neck and a pressed top and it’s bound to go up in value. I’ve also got a Starfire I and a ’67 CE-100. The big bodied Guilds are fantastic too and a lot of my customers are jazz players so they sell very well. Again I think Guilds are currently undervalued on the vintage scene so you can get a lot for your money.

Final part of the interview next week.