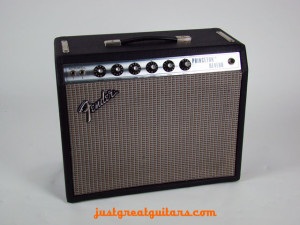 Here’s Part III (and the final part) of the interview with Russ (owner/buyer/founder of JGG) conducted by Huw Price.

Russ also has a predilection for small Fender valve amps, so what’s the reason for that?

‘Well occasionally I end up buying amps when I can’t find any guitars to buy. Everybody knows about the Blackface Fenders, but lots of people are unaware that for the first year of the Silverface models they had an aluminium trim around the grille cloth. If you find one like that you can be pretty confident there’s a Blackface circuit amp inside that Silverface cabinet. At the moment I’m really enjoying playing through my Deluxe Reverb as well as various Princetons and Champs.

Nobody could accuse Russ of guitar snobbery either.. 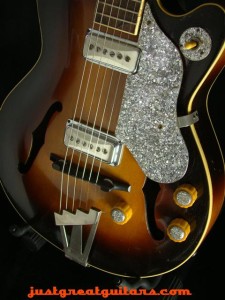 One guitar that I think really illustrates where I’m coming from as a vintage guitar buyer is my 1958 Premier Bantam Deluxe by Multivox. I was so amazed to discover that they had this sparkly pickguard material in the late 1950s. After I bought it I did some research and discovered that people think these pickups are fantastic and the white version this guitar has is the best one. They were made by Rowe of Toledo, Ohio so that means they’re actually DeArmonds. It’s got a rounded 50s style neck and they made an all gold model too. The only drawback of being an on line business rather than a shop is that I can’t put a guitar like this in the hands of a customer that I think will appreciate it. Guitars like this are hard to sell on the web, so I can only buy so many before I’m over stocked. It’s a shame because to me this is a delight. 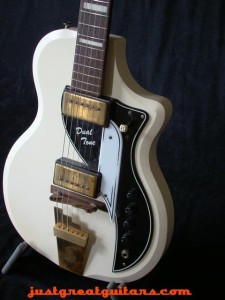 ‘I’ve also got a Supro Dual Tone with the lovely big tuning keys and although it’s not particularly joyful to play it has a lovely sound. I ran into a guy wandering around with a Kay Galaxie and it was so cheap I bought it. It’s kind of funky and I like the colour.’ Japanese solid body replicas can be superb, but they were just as good at making jazzboxes. ‘I was always a fan of the Gibson Howard Roberts and on my last trip I was lucky enough to buy two of them. One is a Gibson Howard Roberts Fusion and the other was a bit of a surprise. ‘Everything about it looks right, from the tailpiece to the soundpost but it says Electra on the headstock. Now I think it’s an Ibanez and the quality is stunning. The initials on the scratchplate are GHG, for George H Goodness who played with a group called The Mel-O-tones. It’s such a deal for somebody because it’s a cheap guitar and it’s as good as the equivalent Gibson.’

‘I’m really fond of Gibson B25s and I’ve got sunburst and natural ones. They’ve got small mahogany body and people just fall in love with them because of their charm and they have become quite expensive. ‘After I got my Gibson J60 I did quite a bit of research and it’s actually an advanced jumbo, which means it has forward shifted X bracing. Apparently Gibson Montana only made twelve like mine in walnut. I’d call guitars like these heritage guitars because you’ll end up passing them onto your kids. ‘My daughter is eight and she’s quite musical and she likes to sing. She taught herself how to sing ‘My Funny Valentine’ and we do it together with me on either my ’54 or ’64 ES175. She even lets me take a solo in the middle.’