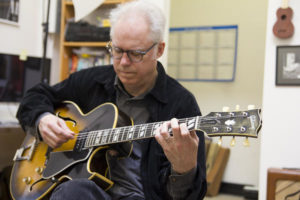 Now and again you come across a story about a vintage guitar that is just too good not to share and this really is one of them. Bill Frisell is a highly respected American guitarist, composer and arranger who was for a long time the ‘in-house’ guitar player for the ECM label, as well as being a bandleader and solo artist in his own right.

Although he has been known for playing solid body guitars for many years, his first significant jazz guitar was a 1968 Gibson ES-175. After playing this guitar through much of his formative years, he finally sold the instrument before moving briefly to Europe. Realising that he had probably made a huge mistake in selling the guitar, Frisell then spent much of the next 37 years trying to track down it’s whereabouts via a serial number.

For most people this would likely have been a fruitless search, as vintage guitars can often change hands privately without ever going through a dealer. In Frisell’s case however, luck was definitely on his side as he had an old friend working for the Gibson company who miraculously found a Facebook advert with what he felt might just be Bill’s old guitar. Upon further investigation and a check of the serial number, it did indeed turn out to be his original guitar. Delighted that he had finally found his old guitar Bill then purchased it back. The video below details the whole story in Bill’s own words and you can also see and hear him playing it. He looks a happy man too!